As the First World War raged in Europe, American industries faced critical labor shortages. So, too, did the Pennsylvania Railroad, which in May of 1916 began to offer free transportation north to southern Blacks willing to work for the railroad. By the time the PRR discontinued its free transportation policy in July 1917 it had carried north more than 13,000 men and women. The Erie Railroad brought another 9,000 north, at the same time that the B & O transported 10,000 or more from the docks of Baltimore to Philadelphia, Pittsburgh, and Cincinnati, where they were distributed to railroad camps and corporate customers.

Northern industries' decision to open their doors to African-American workers set off a great exodus, as tens of thousands and then hundreds of thousands people fled the racial oppression of the American South for the better jobs, higher wages, right to vote, personal safety, and educational opportunities that they could find for themselves and their children in the north.  By the time the Great Depression ended the First Great Migration, some 1.6 million African Americans had fled the South.

The Workshop of the World

Philadelphia, located just north of the Mason Dixon Line, was the nation’s third largest city, its second biggest port, and a major industrial metropolis. Fueled by war orders, the city’s industries had a voracious demand for new workers. Between May 1916 and the spring of 1918 southern Blacks poured into the city at a rate of 150 a week.  Another 8,000 and 12,000 then arrived in just three months that summer.

Once there, Black men found employment in the steel mills and munitions plants in Nicetown, Eddystone, Coatesville, and Carney’s Point, New Jersey; they manned the shipyards in Philadelphia, Chester, and Camden; worked on the docks and wharves and in the sugar mills and oil refineries that lined the Delaware River, and did the hard physical labor needed throughout the region.  Thousands of southern women found employment cleaning, cooking, and caring for the children of White families, while others worked in the city’s factories.

The massive influx of newcomers strained the city’s resources to the limits. Jobs may have been there for the taking, but the already inadequate housing, health care, schools, and other services available to African Americans were quickly overwhelmed. To welcome the newcomers and provide for their needs, the Black churches, Christian Street YMCA and Catharine Street YWCA, and other Black organizations opened their doors to provide food, a place to sleep, and much needed advice on how get a job and present oneself in public in a way that would not bring further condemnation upon the race.  Black leaders joined with concerned Whites to form the Negro Migration Committee, which helped address the housing crisis, and coordinate job placement, relief work, child and health care, vocational training, and other essential services. New organizations emerged, including the Association for the Protection of Colored People, formed after White attacks in the summer of 1918, to protect the rights of African Americans to live peacefully in Philadelphia.

“Let This Be Your Home”

Between 1910 and 1920 Philadelphia’s African American population soared from 84,000 to 134,000. By 1930 half of city’s Black residents, now some 219,000 strong, had come from just four southern states: Virginia, South Carolina, Georgia, and Maryland. In South Philadelphia, for generations the heart of Black life in the city, newcomers pushed west in the 7th and 30th wards towards the Schuylkill River and south into the Italian neighborhoods. Others moved into West Philadelphia, Germantown, Northern Liberties, Elmwood, and Southwest Philadelphia. Geographically, Philadelphia was the nation's largest city. Retaining a preference for single-family rowhouses, Philadelphia offered newcomers a greater opportunity for home ownership than any other northern metropolis.  By 1930 African Americans owned more homes in Philadelphia than in any other city north of the Mason Dixon Line. “It's a funny thing,” realtor Isadore Martin recalled in 1984, “but in the South to own your own home was a very important thing.”

Black settlements in the city developed distinctive personalities and reputations.  There were the depressed and blighted colonies in the old court and bandbox sections of the river wards; tenement districts along the Lombard Street corridor and in the north side Tenderloin district; small house colonies near Girard College in North Philadelphia, above Market Street in West Philadelphia, and in Germantown; respectable home owning districts in West Philadelphia —the "land of sun porches, rubber plants, and second mortgages"—and upper North Philadelphia; and satellite suburban communities in LaMott, Chester, Darby, Yeadon, and towns along the Main Line. While South Philadelphia remained the heart and soul of Black Philadelphia, North Philadelphia experienced the greatest growth and, surpassing it in population, became the third largest Black community in the country, trailing only Harlem and Chicago's South Side.

The southern newcomers did more than just get jobs and buy homes. Through their soaring numbers and income they became a force to be reckoned with. Black consumers fueled the growth of a new generation of Black business persons and entertainers, builders and engineers, lawyers and doctors; men and women who would help lead the race into a new world of prosperity and independence. These were New Negroes, confident, ambitious, independent, and optimistic about the future.

At the corner of Broad and Lombard Streets, bankers Brown and Stevens, the pride of their race, in 1919 opened the palatial Dunbar Theatre, the first African-American built and owned theater in Philadelphia history.  And here, on a Sunday in March of 1921, more than 2,000 gathered for a great rally organized by Marcus Garvey’s Universal Negro Improvement Association. To those who revered him, Garvey, the “Black Moses,” embodied a new spirit of racial consciousness and an international community of interest that inspired the Black masses.

Disenfranchised in their homes states, southern newcomers also helped lead the movement for Black political empowerment in Philadelphia and Pennsylvania that came of age during the Great Depression. It was North Carolina-born Hobson Reynolds, a state legislator, who in 1935 introduced the Equal Rights bill that outlawed segregation in the state of Pennsylvania. And it was Reverend Marshall Lorenzo Shepard, another transplant from North Carolina, who became the first African American elected as a Democrat to the Pennsylvania legislature in 1934, and the first African African to deliver the opening invocation at the Democratic National presidential convention, held in Philadelphia in 1936.

Born in Maryland, Crystal Bird Faucet began to lead voter registration drives of Black women across the country in the early 1930s. In 1938 voters in Philadelphia elected her the first African American woman to the Pennsylvania legislature.

In 2010 some 644,000 people-- more than 44% of Philadelphia’s 1.5 million residents-- were African-American. More than 610,000 of them lived in West Philadelphia, North Philadelphia, Point Breeze, Southwest Philadelphia, and Germantown. Together, these neighborhoods, roughly 82% African American, in 2010 made up the fourth largest concentration of predominantly Black population in the United States. 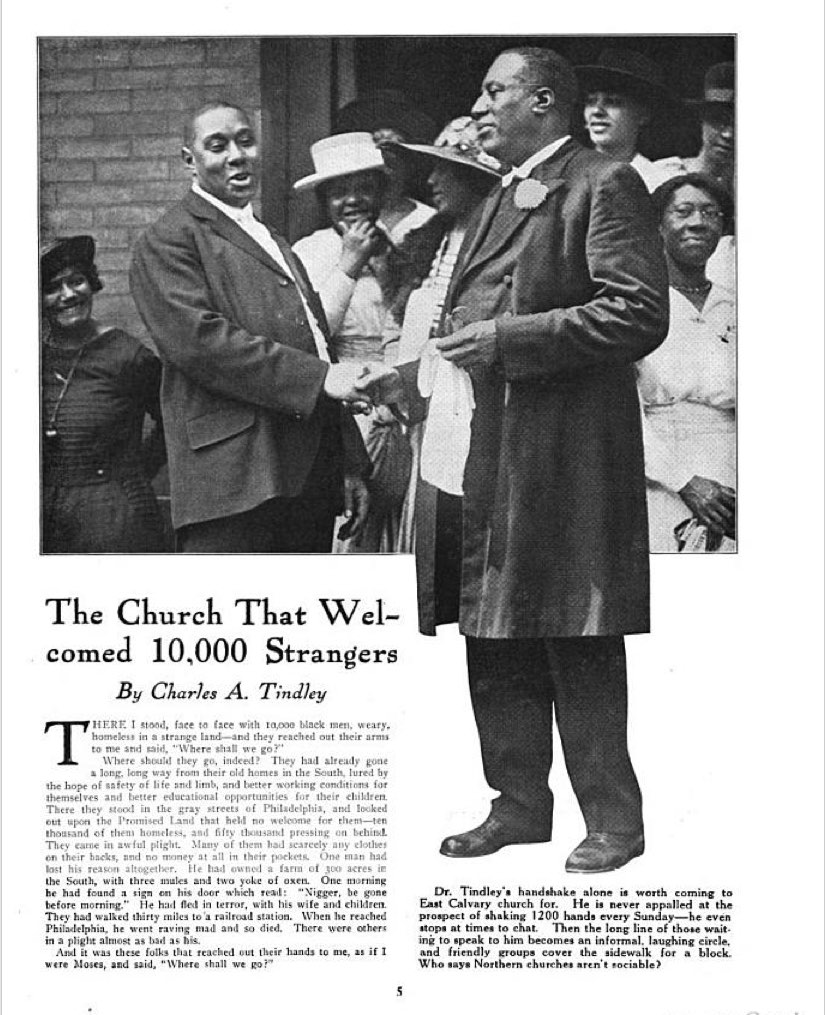 "Let This Be Your Home" 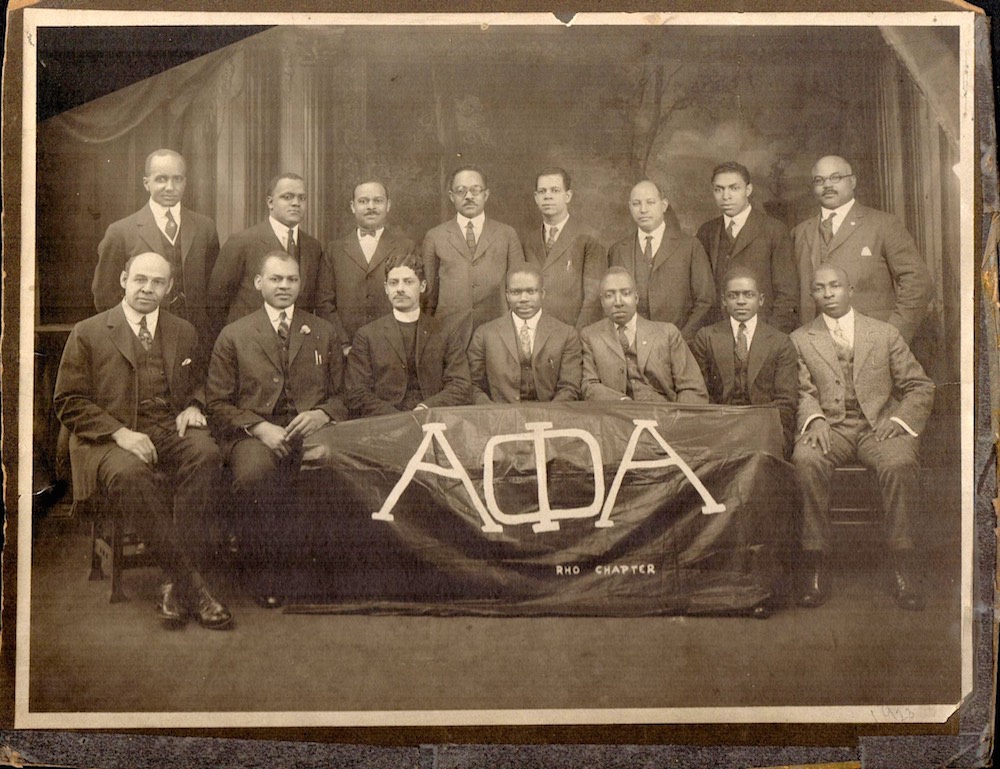 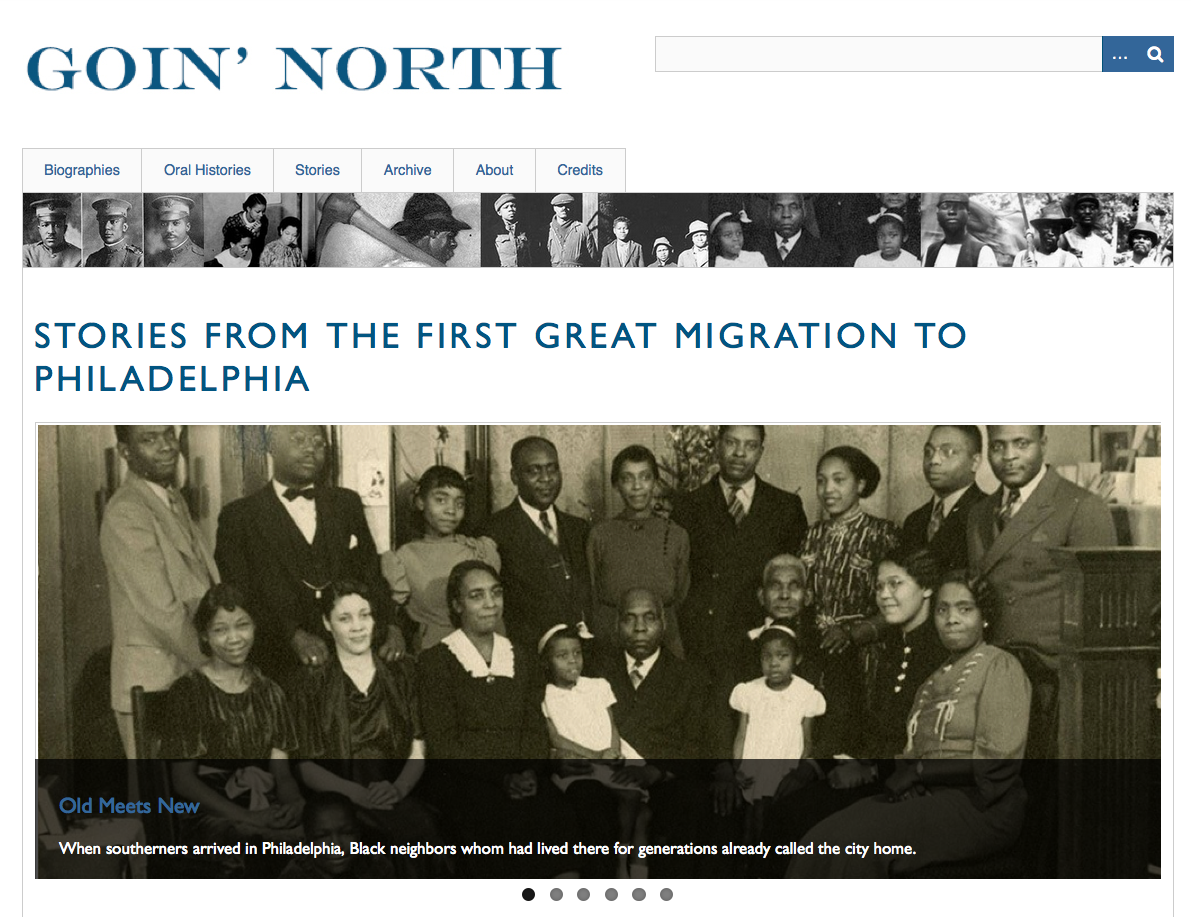 Goin' North: Stories from the First Great Migration to Philadelphia 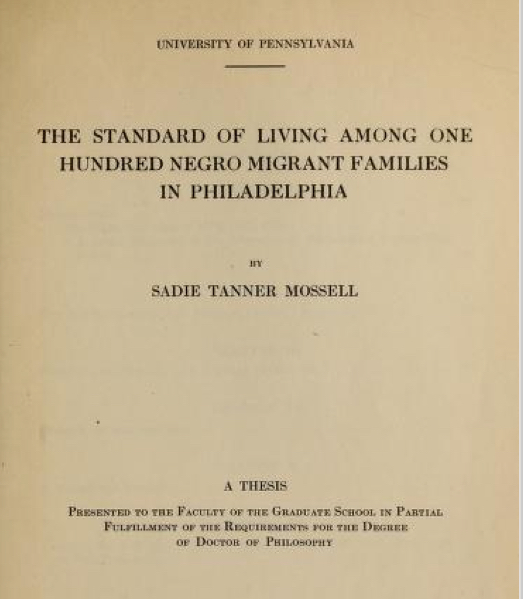 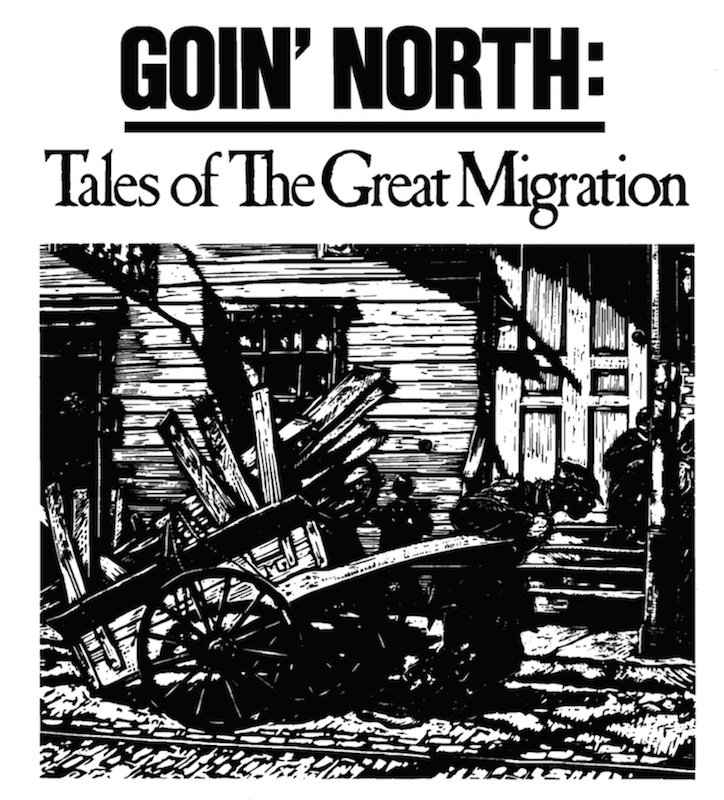 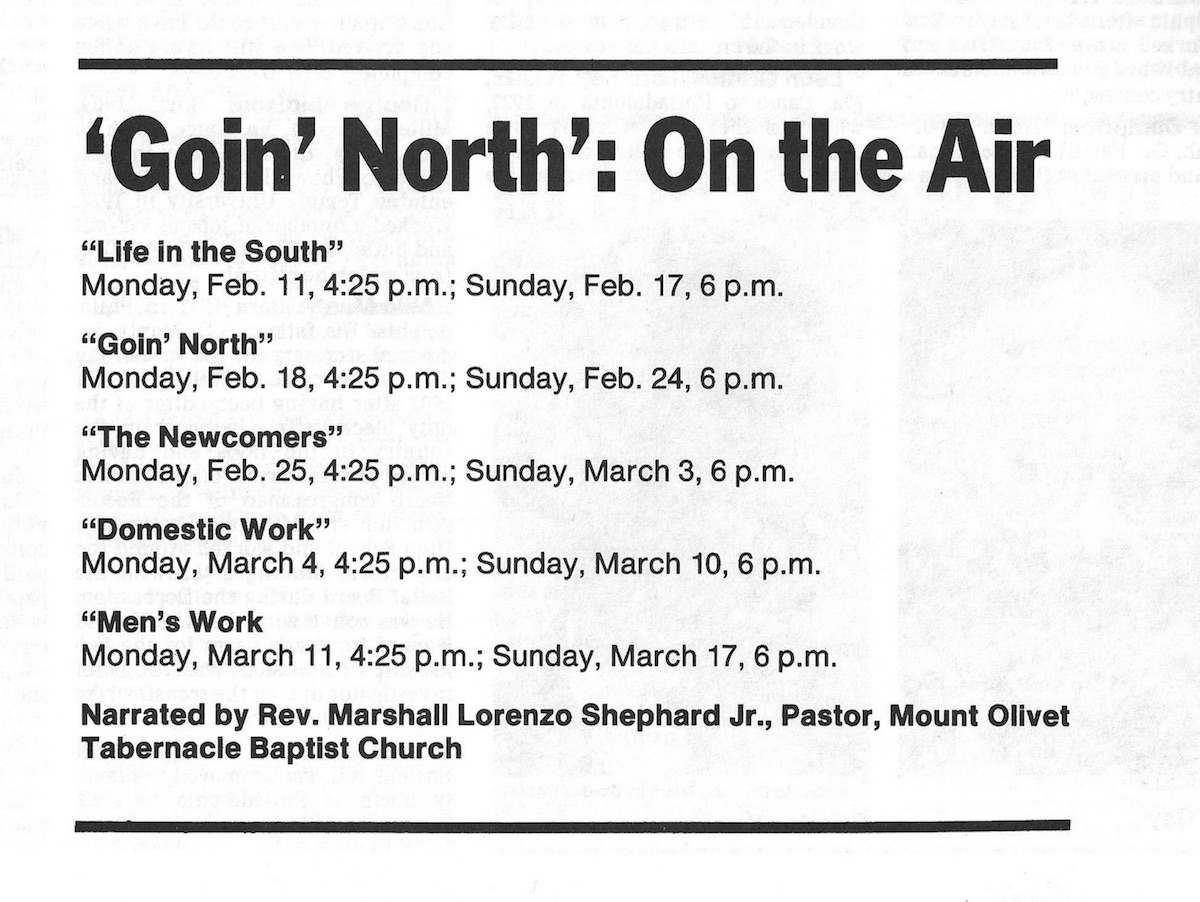